Green Gold Animation has been the pioneer in creating original Indian animation content for over a decade. Chhota Bheem, produced by Green Gold Animations for the past decade has been hugely popular across all leading TV and Digital platforms drawing an active viewership of over 60 million. Chhota Bheem Kung Fu Dhamaka, the first Native 3D stereoscopic theatrical feature of Chhota Bheem is a new milestone in Indian cinematic history. The movie witnesses Bheem in a new 3D avatar enabled by Autodesk software – Maya and Arnold. The entire 3D animation, the look and feel of the movie, and the final coloured CGI output were generated using Maya at Green Gold Animation’s Mumbai based studio - Golden Robot Animation. Autodesk has joined hands with Green Gold Animation and Golden Robot Animation in fuelling the evolution of the Media & Entertainment industry in India with world class technology for CGI, VFX and Special Effects.

The movie opens with Bheem and his friends travelling to medieval China during the time of the dragons, to the biggest Kung Fu competition of the world hosted by king Jian. However, in a turn of events, the Chinese king's arch-nemesis Zuhu captures his daughter princess Kia by force. Bheem and his friends set out on an adventure across China to save the princess, and along the journey, he rediscovers friendship, courage, knowledge and the inner strength needed to defeat the tyrannous villain Zuhu.

As the only franchise in India to boast of three theatrical feature films, Green Gold’s aim with Kung Fu Dhamaka was to up the ante visually, as well as to create an experience that the audience enjoys.With the exposure of the Indian audience to international animated films, raising the bar on both the above variables was critical to the success of the movie.

The film's vision to deliver an action-heavy movie with quality and experience at par with animated Hollywood films was no easy feat on a limited budget. However, Green Gold’s expertise, wonderous team and Autodesk’s software Maya and Arnold, made all the above feats possible without any trade-offs.The creative vision was to make the film’s canvas larger than life with visuals and action sequences that the Indian audience, especially Bheem’s fans hadn’t seen before.

Reworking the Kung Fu Action graphics, on an iconic character like Chhota Bheem, which has a legacy of 10+ years also meant that starting from the scratch while sticking to the roots of the original design and characteristics. This was a huge challenge from design as well as performance point of view. Being a stereo movie, the usage of matte paintings were limited and multiple locations had to be entirely created in 3D to achieve maximum depth.

The movie has many action sequences that needed to be choreographed and then animated in the 3D space. The hardest part was to maintain consistency of the acting in both emotional as well as action sequences that were martial arts heavy. A large team of animators at Golden Robot Animation, utilized inbuilt tools and features within Maya to help them with their workflow. Special proprietary tools and scripts were built by in-house programmers to create action libraries and pose charts and expression that helped in standardizing the characters' actions across the team. 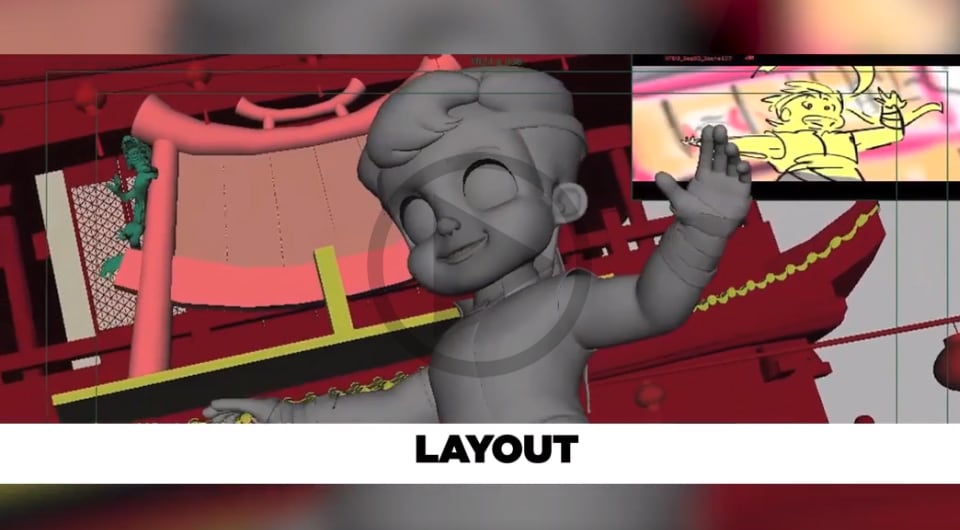 The art, pre-production and 2D visual development team based in the Hyderabad facility worked extensively in creating detailed designs for the multiple locations with various lighting and mood settings so that the 3D team could have clear direction while lighting the scenes.

A 3D visual development team at Greengold’s Mumbai based Golden Robot Animation team then took key greyscale shots from within Maya at the layout level and made coloured paint-overs to make key lighting shots, which gave lighting information to the 3D lighting department. Many sequences that needed multiple iterations in the look development stage had to be sent back to the texturing stage after the creative director had completed master key compositing. Producing a movie of this scale in native stereo CGI made the challenge twice as hard as the team had to manage heavy scenes while ensuring streamlined left – right renders for the 3D stereo output.

The opening scene of the movie is an example of the kind of challenges the team had to overcome. The film opens with a single moving camera shot which had to pass through complex visuals like volumetric clouds, crowd, foliage, and rivers as well as hundreds of lights which are a challenge in any 3D animation project. A shot this complex usually needs multiple files, resources, and a complex workflow, but with Arnold's stand-in features and its ability to handle complex geometrics displacement with efficiency, the whole shot was done in a single go. The shot with hundreds of lights handled by Arnold Lights combined with MASH's control over the massive foliage sequence made work easy for the animators without any dip in the quality. 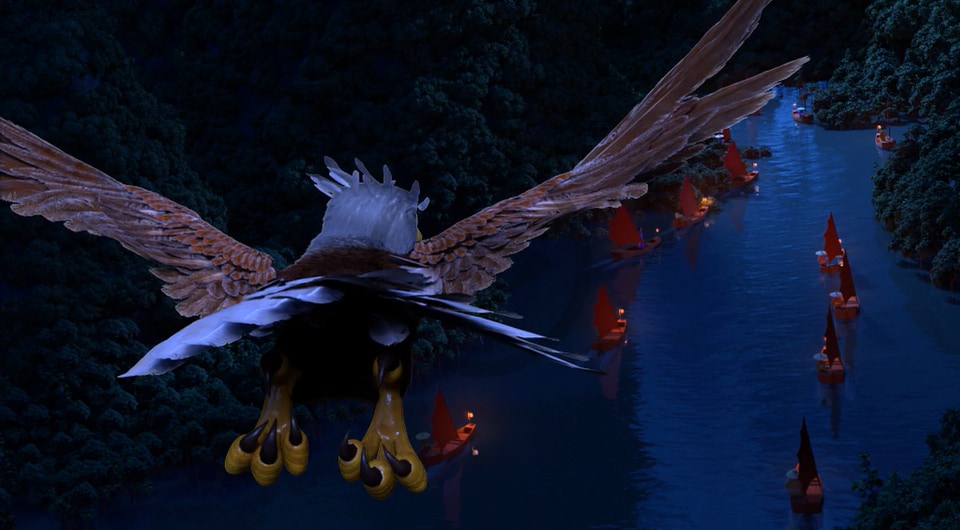 Initially, the movie was planned on Mental Ray, but after the preliminary rendering test, the production was moved to Arnold, a physical-based renderer within Maya. Arnold being the default pre-installed renderer in Maya was a huge plus. Working on Arnold also enabled the artists to increase the quality of output with new tools such as the BIFROST plugin. Furthermore, it helped in the iterative 3D lighting and look development stage, with faster responsiveness as well as IPR for real-time changes - which simply meant that lighting team did not have to wait for time-consuming rendered works. Finally, using Arnold meant that the entirety of production could be carried out on Maya thus reducing the reliance on third-party solutions and allowing artists to quicken their working pace.

An important character in the film, the Mahayang dragon, was a tricky one as it was visualized and designed as a mystical creature with glowing and flowing fur. After trying multiple versions of the character using Maya default fur, the team decided to go with XGEN fur which yielded the best result. 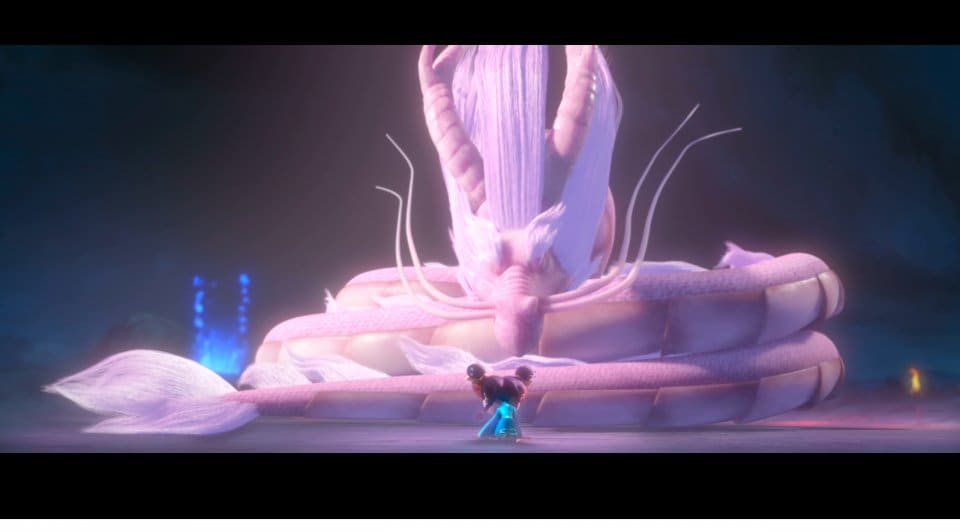 An important character in the film, the Mahayang dragon, was a tricky one as it was visualized and designed as a mystical creature with glowing and flowing fur. After trying multiple versions of the character using Maya default fur, the team decided to go with XGEN fur which yielded the best result. 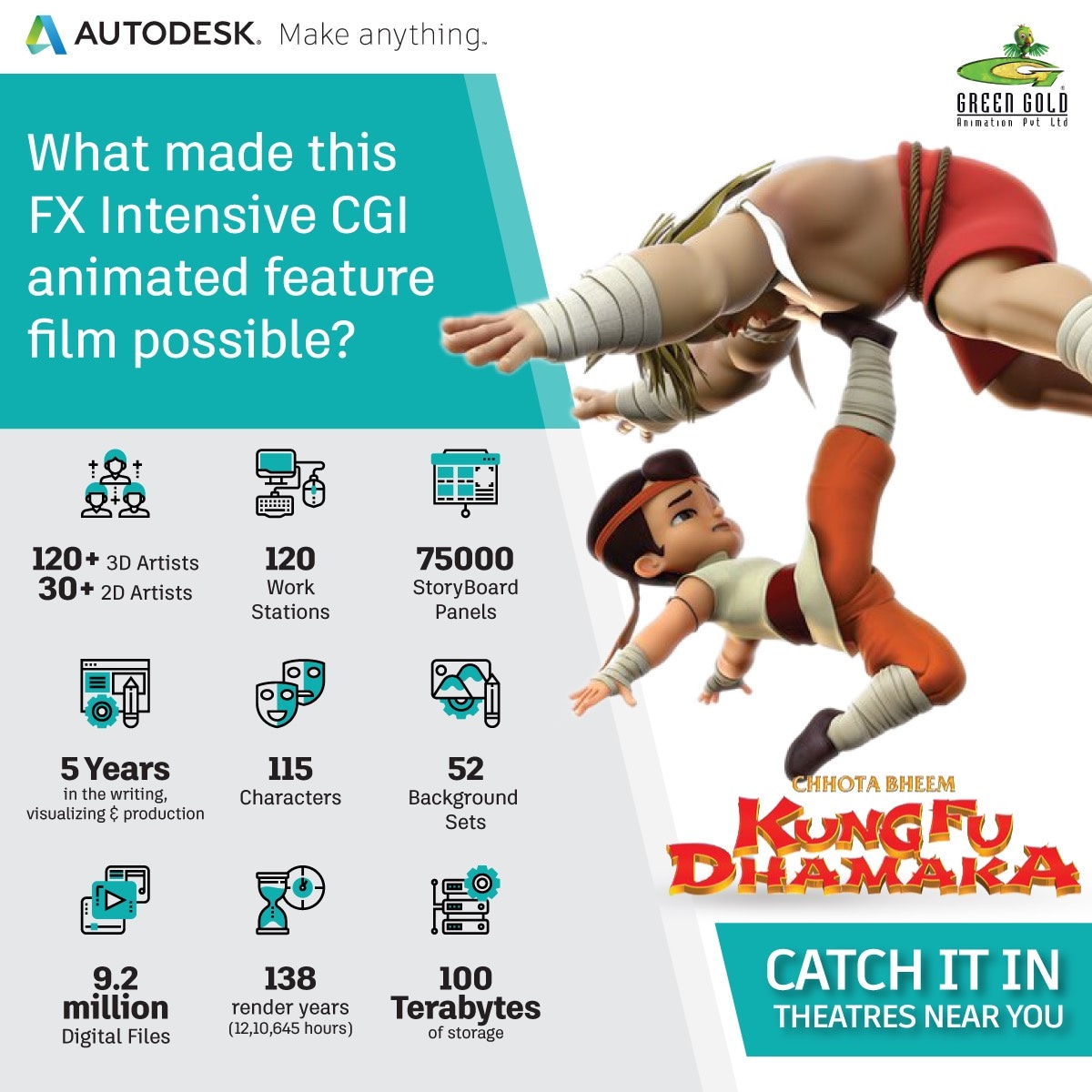 Kung FU Dhamaka is one of the most complex and effects-heavy feature film ever attempted in the Indian animation film production space.

The special effects team at Golden Robot Animation had to design and execute over 700 shots involving organic fire, rivers, waterfalls, storm, rain, debris, lava as well as magical special effects of sky portal, Mahayang dragon, power swirls and more. Special effects departments has to usually use various software and tools to get the best result for such complex organic effects resulting in complex workflows along with additional burden of importing and exporting files between multiple software and departments. However, with the robust tools within Maya like Arnold, BIFROST and Maya Fluids, the FX , team was able to obtain the best results while keeping the workflow simple and easy to manage. Autodesk Maya equipped the technical team to handle the heavy scenes with ease, and it allowed the artists to focus on their acting performance rather than on the technical aspects of the software.

Chhota Bheem Kungfu Dhamaka is our most ambitious project so far. We have explored technology and have put in efforts to keep the audience spellbound with the creative and visual effects. This is the first time that we have put in great works to create an immersive experience using 3D stereoscopic technology. Autodesk has been our prime partner in this creation; especially some scenes which they have helped develop profoundly. I strongly believe that such partnerships are the need of the hour to boost animation in India and together we can visualize and create grand stories that can be equal to global standards.

Chhota Bheem Kung Fu Dhamaka has been a passionate project for everyone in the Greengold and Golden Robot Animation family. The Seasoned teams’ Years of experience working on international projects helped translate the Director’s vision to reality at the grand scale at par with any Global Animation feature film thanks to the cutting edge technology of a platform like Autodesk Maya combined with detailed Preproduction Visual Imagery. We hope the movie will be able to entertain audiences not only in India but also worldwide.

Click here to know more about Maya 2019 and Arnold GPU

Our expert team can help you find the right solution.

Your message has been received. We'll get in touch shortly.